How to use a heavy bag in an apartment 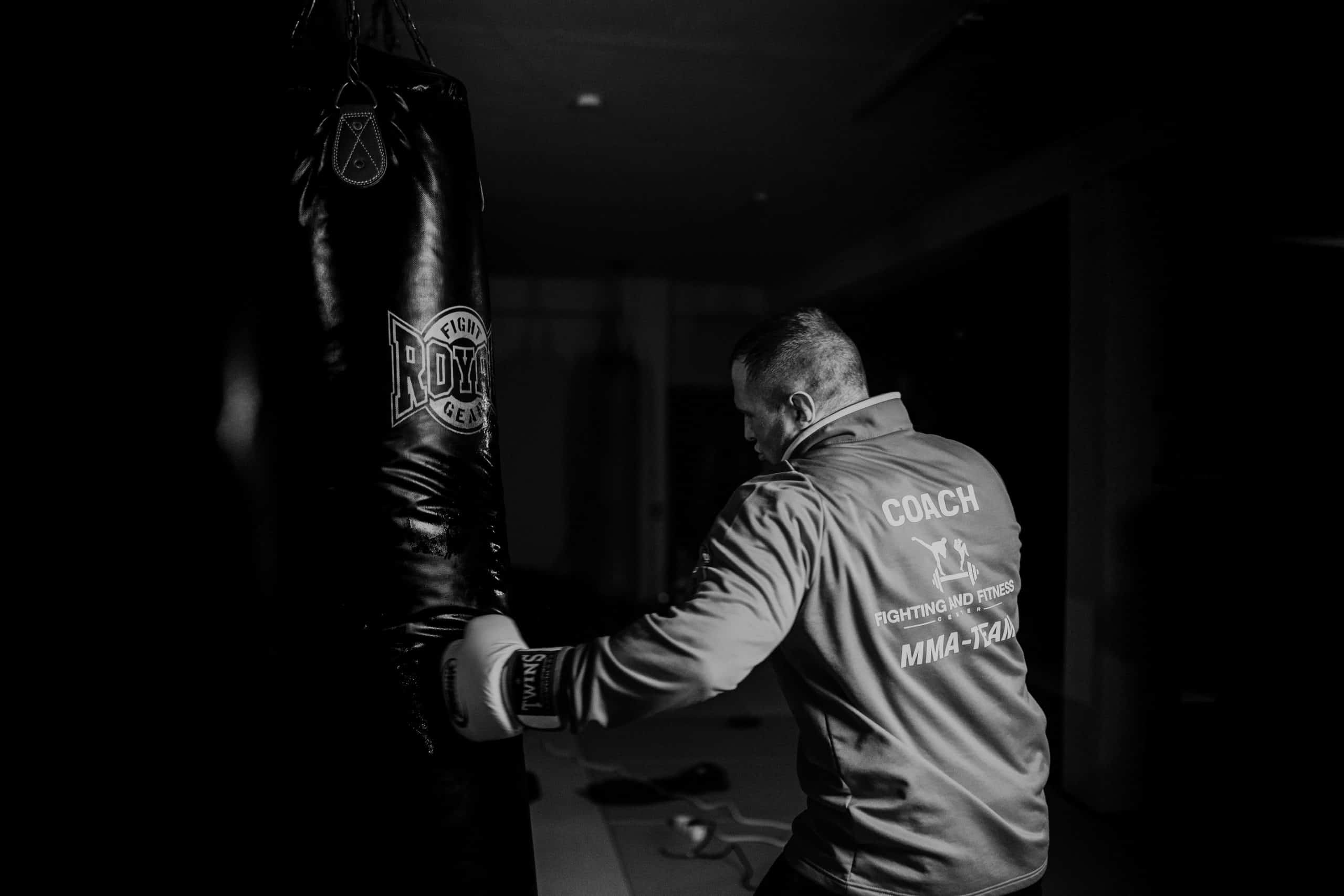 Many reading this are likely to be apartment-dwellers, living in a small space. Perhaps you rent your apartment, which means you’re very limited to what you can do as regards to drilling into surfaces, hanging things up, etc. If you’re in this situation and want to get started boxing, how on earth are you supposed to use a heavy bag in an apartment without destroying the drywall or driving your neighbours mad? 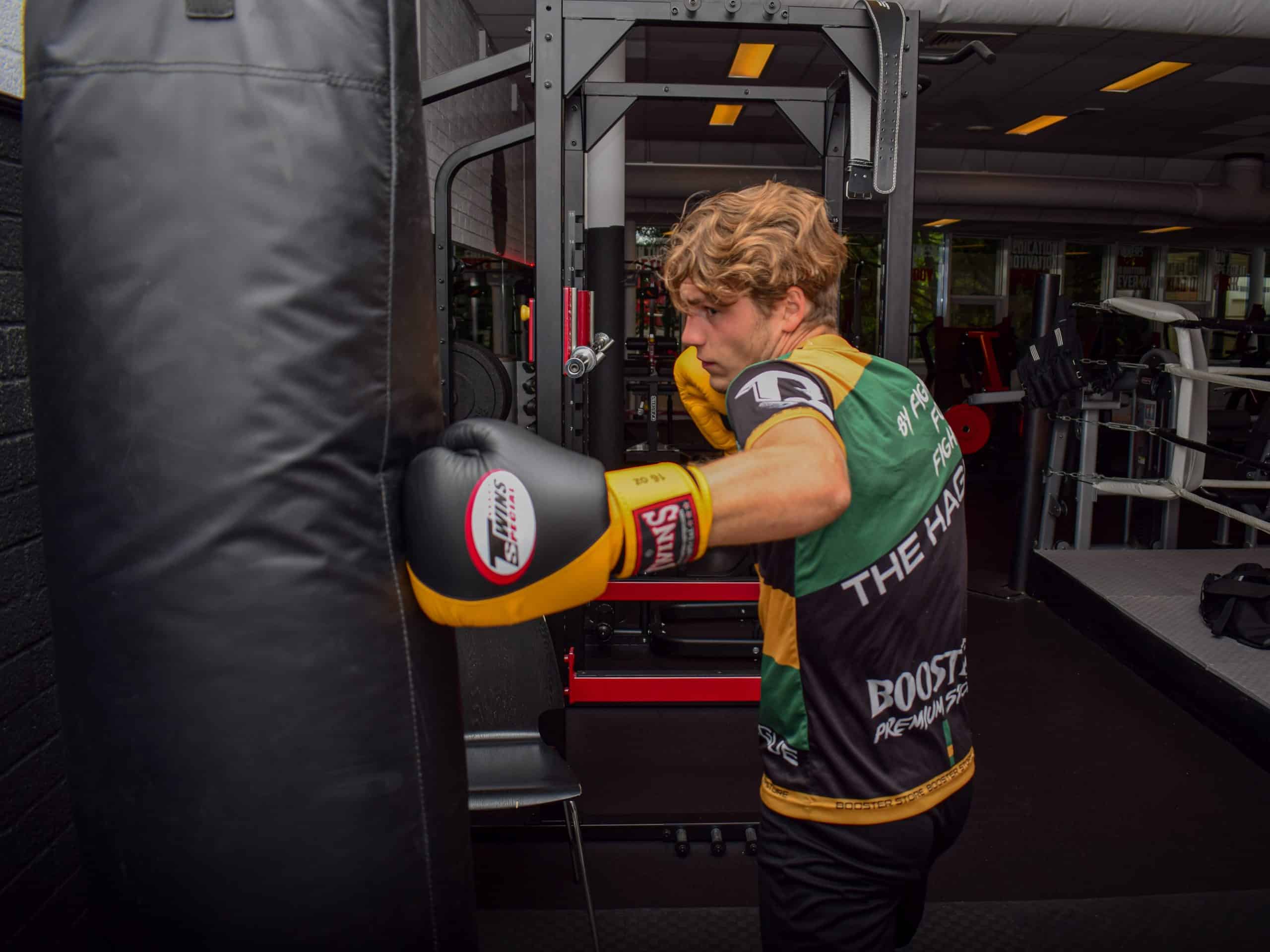 Fortunately, there are a few solutions that’ll help you get into boxing without all these drawbacks. Be warned, though - this whole article is going to focus on compromise. In my view you simply cannot hang up a full-size heavy bag in an regular two or three-bedroom apartment - even if you can get permission to drill the walls, the vibration that the heavy bag makes when you hit it will reverberate through the walls and irritate your neighbours.

That being said, let’s have a look at how you might use a heavy bag in an apartment.

Why are heavy bags not ideal for apartments?

OK - this might seem like a blindingly obvious question, but stick with me. There are numerous reasons and considerations that you have to take into account when looking to put a heavy bag up in any home, let alone an apartment. If you own a home, this is kind of negated if you have a basement or garage, as the isolated nature of those two types of room solves many of these problems.

Those who live in apartments likely don’t have this luxury. Having a heavy bag in your apartment really causes three separate problems:

A heavy bag is noisy. Think about it - the walls and ceilings in most apartment buildings are paper thin. Your neighbours WILL hear what you’re doing, and chances are they won’t like it. Put it this way - if you can hear your neighbours walking about, talking, playing music - they will be able to hear you working the heavy bag.

A heavy bag also requires a lot of space. You need to be able to move around the bag, and the bag needs to have space to swing. Apartments aren’t known for being the largest types of home, and it’s unlikely that you have the spare space in your apartment suitable for a full size heavy bag to be hung. In addition to this a heavy bag installation is permanent - you can’t just put it up when you’re training and take it back down when you’ve finished. 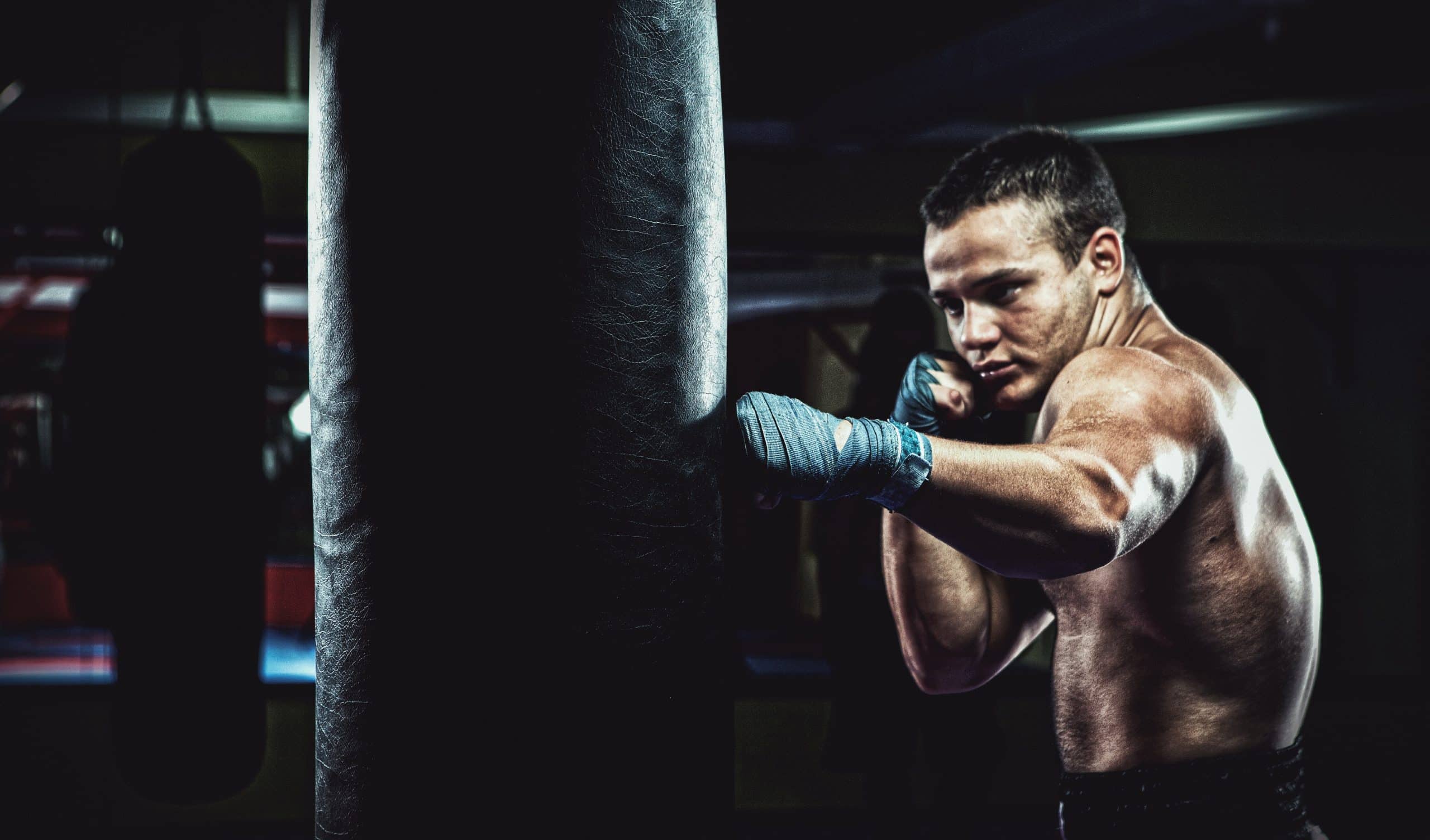 Thirdly, most of us rent our apartments. We have specific clauses in our lease agreements that say we’re not allowed to alter the property in any way - and that includes drilling into the ceiling or wall studs to hang a heavy bag. Doing this is likely to lose you your security deposit. Plus, you’ve got no idea how strong these walls or ceilings are - they may not be able to take a 100lb heavy bag - and the last thing you want is to wake up in the morning and have your ceiling caved in as it couldn’t support the weight of the bag. If it’s your own home, then it’s your mess to clean up - but try explaining something like this to a grumpy landlord.

In addition to this, your neighbours are going to be hearing the sound of you hitting a bag without any kind of context (unless you tell them beforehand.) You have no idea what they’re going to think is going on - they might think there’s some kind of domestic violence, that maybe you’re having a fight with someone and call the police. Seems a bit extreme but you never really know.

The best way to use a heavy bag in an apartment

I’m going to preface this section by saying that there’s no such thing as a good heavy bag for an apartment, despite what a lot of articles online say. There is no alternative to hanging your heavy bag from the ceiling (this is always the best way to train - and I’ve done a full article on it here) and given the constraints we’ve already discussed, this simply isn’t an option for people who live in apartments.

The best way for you to get a proper workout is either to move to a house with a garage, or join a boxing gym. That’s why I’m not going to make any product recommendations in this article - because I don’t think these are really solutions - they just solve one or two of the problems we’ve mentioned. That said, if you’re hell-bent on training in your home, there are a few things you could do instead of hanging a heavy bag to the ceiling.

Buying a freestanding bag means that you can get a heavy bag in your apartment without having to drill or hang it up anywhere. You also don’t need to buy a stand, which you’re likely going to need to hold down with several different weights in order to stop it moving. If you spend enough (and unfortunately you will need to cough up a fair bit, as freestanding bags at the lower end tend not to be very good) you can get a bag that will give you a half decent workout in your apartment. 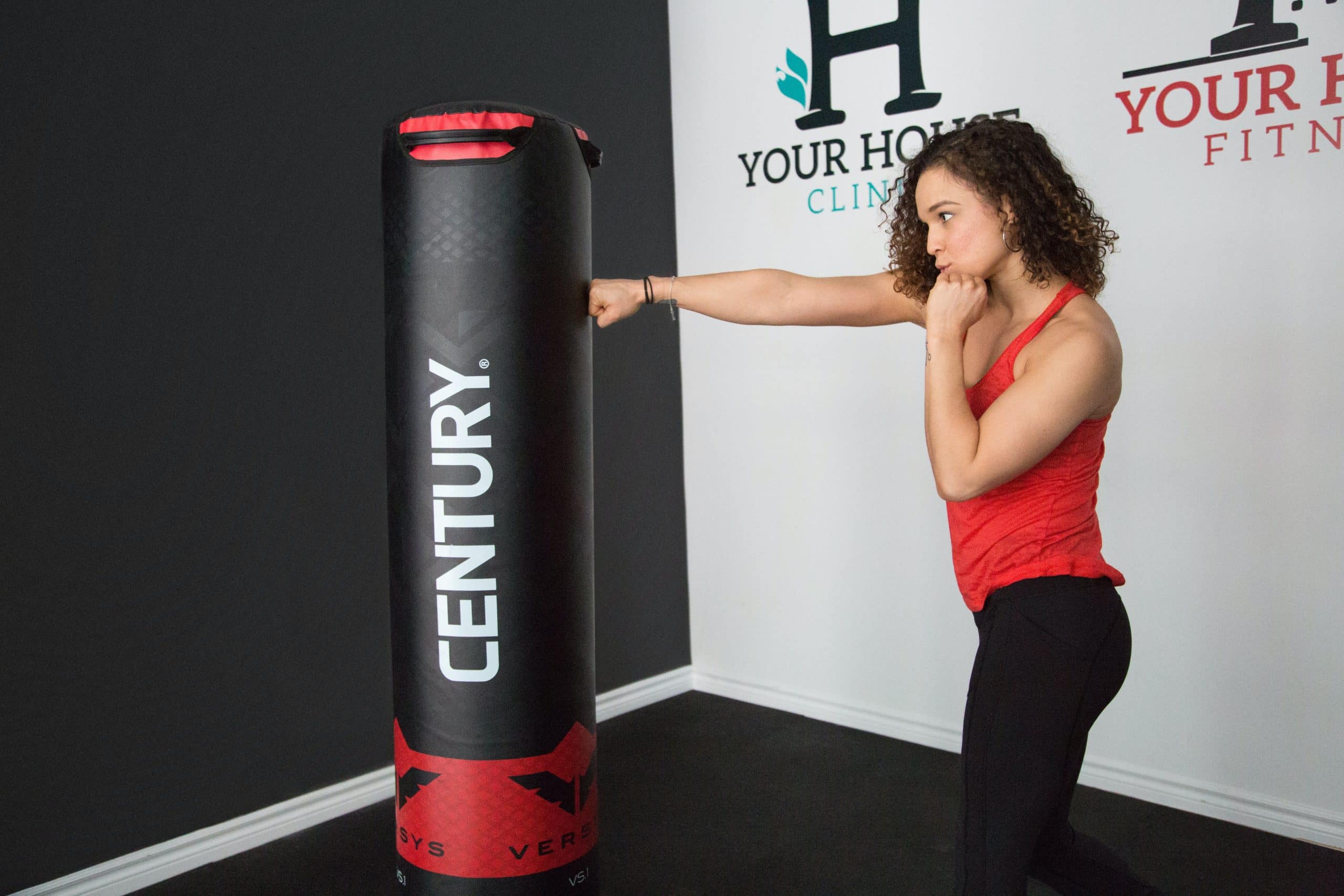 However, it doesn’t solve the noise problem. Every time you punch the bag, the loud smack is going to reverberate through your walls to your neighbours. It might not be as pronounced as a hanging heavy bag, but it’ll definitely be noticeable; and you’re going to be the least favourite resident in your building by some margin.

When you buy a heavy bag, you also need a way to attach it to the ceiling. These often come in the form of heavy steel chains, that connect to a bracket that you screw to the ceiling and then attach to the loops on top of your heavy bag. These ceiling mounts can be noisy themselves - both when you hit the bag, and when it moves. The force of your punch will make the chains rattle, and as the bag swings, this noise will reverberate through your building and will be noticed by your neighbours. 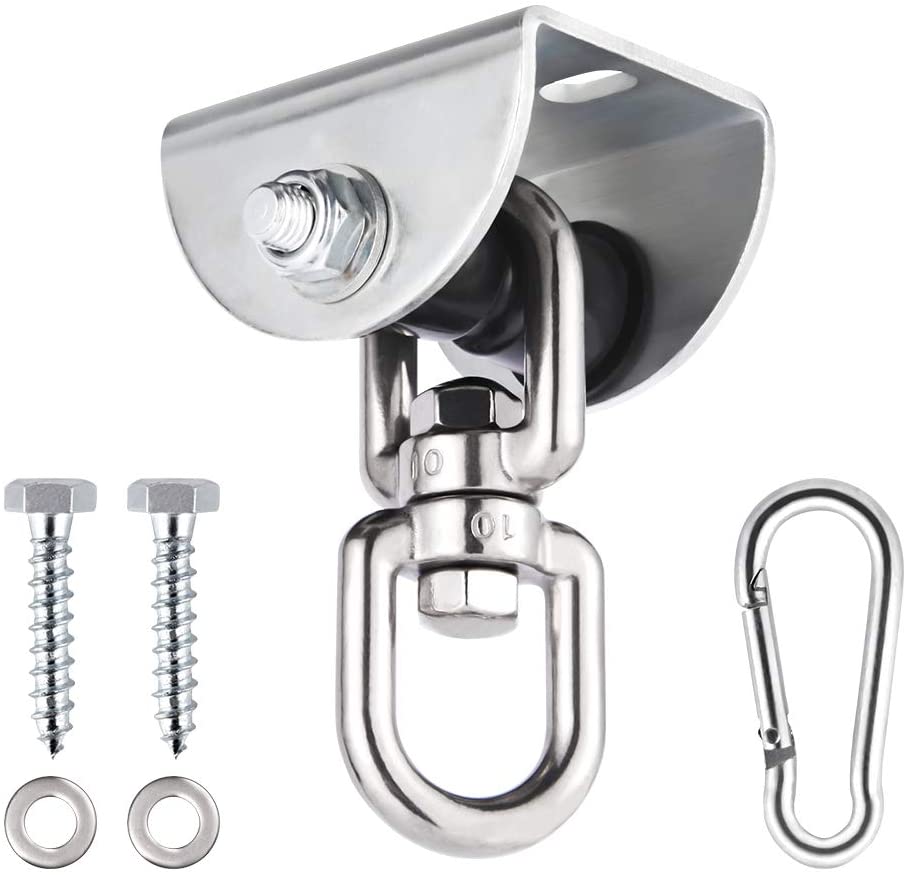 The solution to this is to buy a ceiling mount that is specifically designed to reduce this noise. For example, you may be able to get these mounts that use fabric instead of steel, or other products (there was one on the market a few years ago called the Silencer) designed to reduce the noise made when a heavy bag swings. Despite this, there’s no way to stop the noise of your fist hitting the bag, so even if you were able to make the bag totally silent as it moves, you’re still going to have to content with the issue of the noise made when you strike the bag.

The trusty heavy bag stand is an option that means you won’t have to mount anything permanently. What’s more, these can be had relatively cheaply from Amazon or most sports supply stores. However, heavy bag stands often limit your ability to move around the bag, as they have braces and supports that sit on the floor around the bag that stop you moving left and right. This could have an impact on the noise created, as you won’t be able to move around as much, meaning your footwork isn’t as noisy.

However, this is not a good reason to do this - if a part of your boxing training is going to be compromised, why wouldn’t you just look for a gym to join? This is the main reason I don’t like heavy bag stands - not only are they often quite poorly made, but they really limit your footwork. An opponent is NEVER going to just stand in front of you - and if you don’t emulate that by moving side to side when working the heavy bag you’ll never learn to box properly. 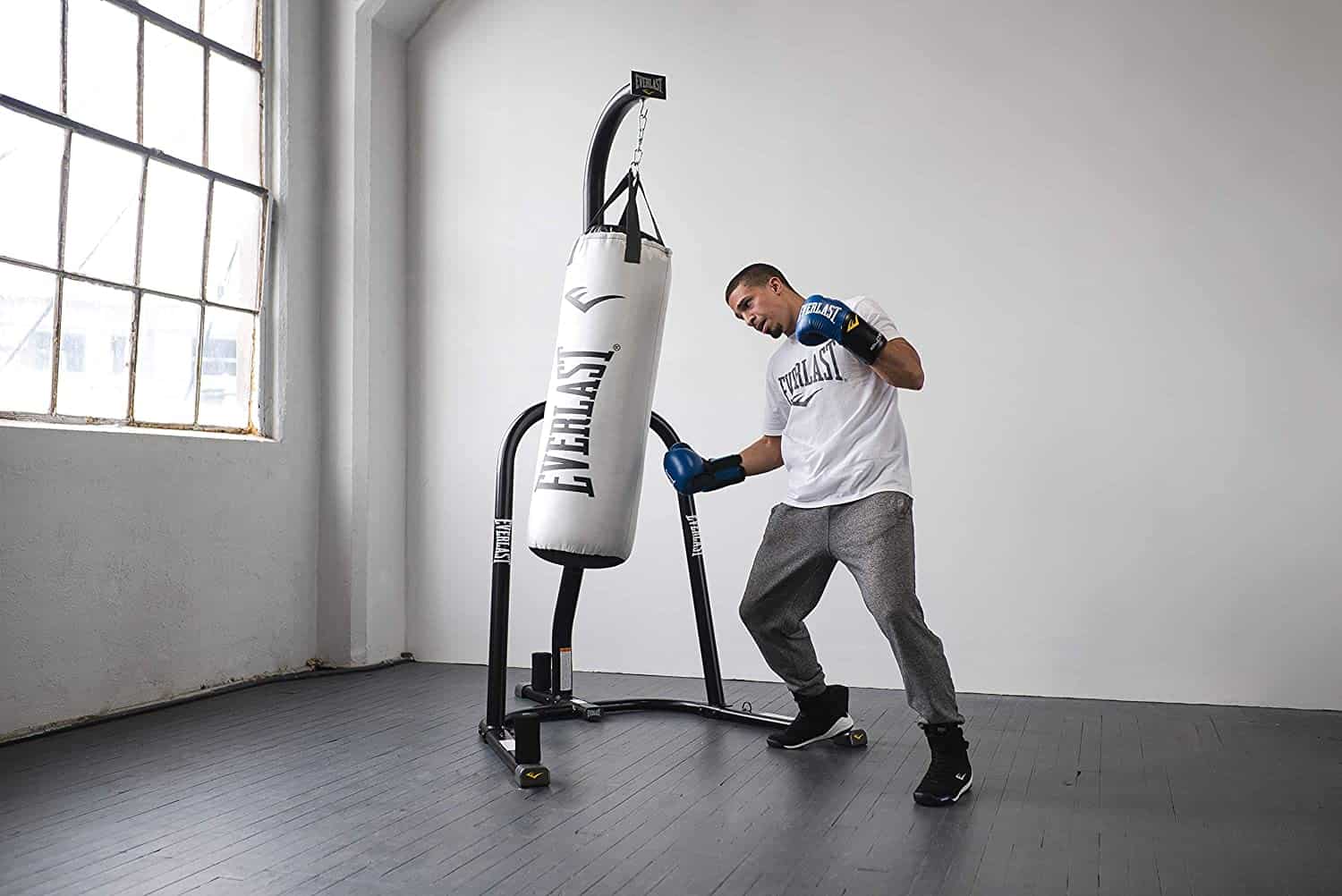 What’s more - heavy bag stands can get very annoying because they often tend to move about when you punch your bag, and need to be held down with weights. If you can imagine the noise you’re going to get when you hit your bag, and those weights clink and the stand moves - honestly you’re solving one problem (the noise of your footwork) and introducing a much bigger one.

This may seem like a decent solution, and in all honesty it’s probably the best solution I could come up with, as it solves a lot of problems. It’s portable, meaning you don’t need a lot of space to train with it, and it can be stored somewhere when not in use. It also doesn’t need to be fixed anywhere and can just stand in the middle of a room. The surface area that you’re hitting is a lot smaller - when you hit a freestanding bag the sound of your punch will reverberate through the whole bag, but if you hit a dummy in the face, there’s a lot less surface for the sound to reverberate through.

Honestly if you’re in an apartment this is probably your best bet - but these things tend to be very expensive - again you’re looking at a cost of over $400. You still don’t completely solve the noise problem - you’re likely to still experience complaints from your neighbours about the noise you’re making when you hit a punching dummy. However, it does solve all the other problems - no drilling, it doesn’t inhibit your training (although I do believe training on a heavy bag is better) and it does reduce the noise a fraction.

So what am I supposed to do if I live in an apartment?

Unfortunately, if you want to start working the heavy bag - not much. You’ll know if there’s a clause in your lease that says you’re not allowed to start drilling into the walls or the ceiling - and even if there isn’t, you are going to be a pariah in your building due to the amount of noise you’re making.

The way I see it, you have two real options.

If you don’t mind annoying your neighbours a little, or you’re on the ground floor, you might think about a punching dummy. Be warned that this is still going to make noise - just how much of it is something you’ll have to find out when you buy one.

Or - the MUCH BETTER option is to find a boxing gym and join it. You won’t just be able to work the heavy bag - those guys will have every bit of equipment, along with a ring that you can spar or shadowbox in. You’re also going to meet like minded people, also interested in boxing, and they might even be able to teach you a thing or two. You won’t ever have to worry about what your landlord will say about you drilling holes into walls, and won’t need to worry about annoying your neighbours.

Check out some of our other articles!