In a poem dedicated to Smokin’ Joe, Muhammad Ali stated, “Joe is going to come out smoking, and I ain’t going to be joking. I’ll be pecking and poking, pouring water on his smoking. This might shock you and amaze you, but I’ll destroy Joe Frazier.”

But, have you ever wondered what sparked the boxing rivalry between Muhammad Ali and Joe Frazier?

The rivalry was so intense that Muhammad Ali came up with a poem to intimidate Joe Fraizer. While it is five decades since Joe Frazier and Muhammad Ali battled their differences in a ring, the rivalry between the two was the brainchild of the most epic boxing fights that we have ever seen. The bunter, trash talk, the ‘poetry’ and epic skills took boxing to a whole new level in the 70s’.

Since iron sharpens iron, the rivalry between Muhammad Ali and Joe Frazier defined how great they were.

In this post, we are going to take you back in time and show you how the rivalry began. Let’s dive in, shall we?

How The Rivalry Started

In 1967, Muhammad Ali was drafted to the United States Army, but he turned down the offer due to his religious beliefs and personal views. As a result, he was banned from boxing competitions for about three years, and his boxing license was suspended. When Joe Frazier was asked about Muhammed Ali’s situation, he accused him of being racist.

Moreover, Joe Frazier stated that if he was in Ali’s shoes, he would have joined the military because that is what a real champion should do. Such comments were the basis of the rivalry between the two boxers.

In terms of boxing competitiveness, Muhammad Ali had a couple of titles under his belt before he was drafted into the United States army. On the other hand, Joe Frazier was still rising in boxing, and people were applauding him for his great skill. While Ali became a heavyweight champion in 1964, Joe Frazier became a heavyweight champion in 1970 when Ali was still dealing with the repercussions of refusing to join the military.

Since Muhammad and Frazier had the heavyweight champion title under their belts, there was some tension forming between the two. In 1970, Muhammad Ali got his boxing license back. His first boxing match in 1970 was against Jerry Quarry. The first bout between Ali and Frazier was also set up.

Finally, in 1971, Joe Frazier and Muhammad Ali took their differences to the ring. After fifteen rounds of boxing, Joe Frazier won the match by decision.

As time passed by, Muhammad Ali commented on Joe Fraizer’s situation. He stated, “the reason he got the decision is this; if you looked at his face, both eyes were closed. His nose was bloody. His lips were cut. His head was swollen. His hair was falling, and he spent one month in the hospital. He spent 30 days in intensive care; no phone calls and no visitors. It’s an eternal beating when you have to rest for 30 days, but he got the decision.”

Well, such comments fueled the rivalry between Muhammad and Joe Frazier.

Muhammad Ali’s Verbal Intimidation Tactic: How It Increased The Tension

While Muhammad was skilled in boxing, he was also quite good at trash-talking and knew how to get into the head of his opponents. Muhammad Ali often intimidated his opponents verbally to make them fight harder. As a result, Ali’s opponents would react out of anger and get tired faster than him while boxing, giving him the chance to attack.

In an interview, Ali mentioned that he told Sonny Liston, “this is the wrong place to get tired,” after pushing and intimidating him to fight harder.

Muhammad Ali also used the verbal intimidation card against Joe Frazier by stating, “I might do something to Joe Frazier that is illegal. My lawyers told me to bring a bail sponsor man to get me out of jail. They might put my tail in Jail, and get me out on bail after what I do to Joe Fraizer.” He also rhymed different words while intimidating his opponents. Muhammad Ali also included humour in his trash talk to ease up the tension.

But here’s the thing; when Muhammad Ali was asked if there was any boxer who talked back, he mentioned that Joe Frazier did.
In a discussion with Cus D’amato, Muhammad also described how would frustrate Joe Frazier with verbal intimidation tactics. As Muhammad was demonstrating how he’ll fight Joe Frazier, he said he’ll be talking down to him by saying, “C’mon Joe. You are not a champ. I’ve got you losing. You lost three rounds already. C’mon now. I’ve hit you four times already.” After that, he mentioned that such comments can make a man worried and weary. 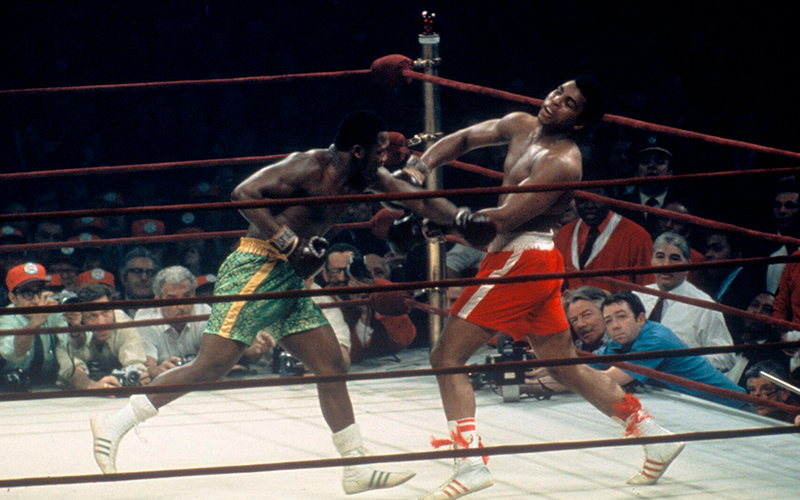 First Fight: Muhammad Ali Vs Joe Frazier – ‘The Fight of The Century’

That’s just the tip of the iceberg.

Everything escalated in the 11th round. Joe Frazier threw some power punches until Muhammad Ali lost his balance and started staggering in the ring. However, Ali pushed himself and countered with some punches too. As a result, the first fight between Joe Frazier and Muhammad Ali proceeded to the 12th round.

Since Muhammad Ali lost his balance in the 11th round, he was knocked down by a heavy hook from Joe Frazier, which landed on his chin during the last few rounds, but he stood up.

Muhammed Ali had been knocked down two times only, but Frazier’s hook increased the score to three. Muhammad Ali pushed himself until he finished the 15th round. Eventually, Joe Frazier won the fight by unanimous decision.

In 1971, both fighters were still undefeated and the fight caught the attention of about three million people. However, the public anticipation had decreased in Super Fight II.

Muhammad Ali switched up his style — he tweaked and improved his style to face Frazier. Ali threw punches that were more accurate than the ones he threw in the first fight.

In the second fight, Muhammad Ali did not stick to the ropes for a long period of time as he did in the first fight. He danced and circled while throwing jabs and combinations.

This made it easier for Muhammad Ali to lead in the first few rounds. Not to mention, in the second round, Joe Frazier lost his composure after Muhammad Ali hit him with a cross. Muhammad Ali won by unanimous decision.

The third fight between Muhammad and Frazier — Thrilla in Manila — was a tie-breaker. Muhammad Ali and Joe Frazier wanted to demonstrate what they were really made of.

Both boxers battled out their differences for the third and final time on 1st October 1975. In the previous year (1974), Muhammad Ali fought against George Foreman, who had an undefeated run at that time.

The bout was titled ‘The Rumble In The Jungle,’ and Ali knocked out George Foreman, claiming the heavyweight champion title again — the second time in his career. When Ali faced Joe Frazier in 1975, he had the heavyweight title under his belt and was in good shape.

The bout started at a slow speed with a few highlights. In the first few rounds, Muhammad Ali moved swiftly inside the ring like he always did, throwing some jabs and combinations at Joe Frazier.

As the fight proceeded into the fifth and sixth rounds, Joe Frazier started to counterattack. In the sixth round, he threw a powerful left hook, which landed on Muhammad’s head, sparking a reaction from Ali.

As a result, Muhammad Ali tried to shake off the punch by talking down on Joe Frazier, saying “they told me Joe Frazier was washed up.” Joe brushed off the comment by replying, “they lied.”

The tables turned in the last few rounds when Muhammad Ali took total control in the 12th round by throwing a combination of power punches. Muhammad Ali kept on throwing power punches in the 13th round, too. Eventually, Muhammad threw a heavy left hook that landed on Joe’s head, knocking his mouthguard out of his mouth — this was one of the main highlights of the fight.

As the fight proceeded into the 14th round, Joe Frazier was heavily injured. His eyes were swollen, and he couldn’t see clearly. While Joe Frazier was severely injured, he was still determined to fight to the 15th round.

However, Eddie Futch noticed that Joe Frazier was injured to the point where he couldn’t see, so he threw the towel to end the bout. In the third fight, Muhammad Ali won through T.K.O (technical knockout).

The T.K.O broke the tie between Muhammad Ali and Joe Frazier.

While Muhammad Ali was a heavyweight boxer, he was quite agile and could throw heavy punches much faster than his opponents.

On the other hand, Joe Frazier was a typical ‘swammer’. He took the fight to his opponent and worked from the body to the head.

Joe Frazier would hit his opponents with some powerful body shots to break down their defense first. If the opponent would let his guard down, Joe Frazier would use his left hook to destroy him.

Since his reach was limited, Joe Frazier relied on close-range punches.

On the bright side of things, the rivalry between Joe Frazier and Muhammad Ali gave rise to three of the most epic bouts in boxing. While Ali loved making fun of his opponents, Joe Frazier took some comments personally. As a result, the tension between the two boxers increased to a point where they couldn’t do an interview without rubbing shoulders.

In some interviews, Ali would throw some shade to spark a reaction out of Joe Frazier.

As years passed by, the tension between Ali and Frazier decreased. Muhammad Ali also apologized to Joe Frazier’s son for some of the things that he had said about Joe Frazier. In the end, each fighter admitted that his opponent was great.